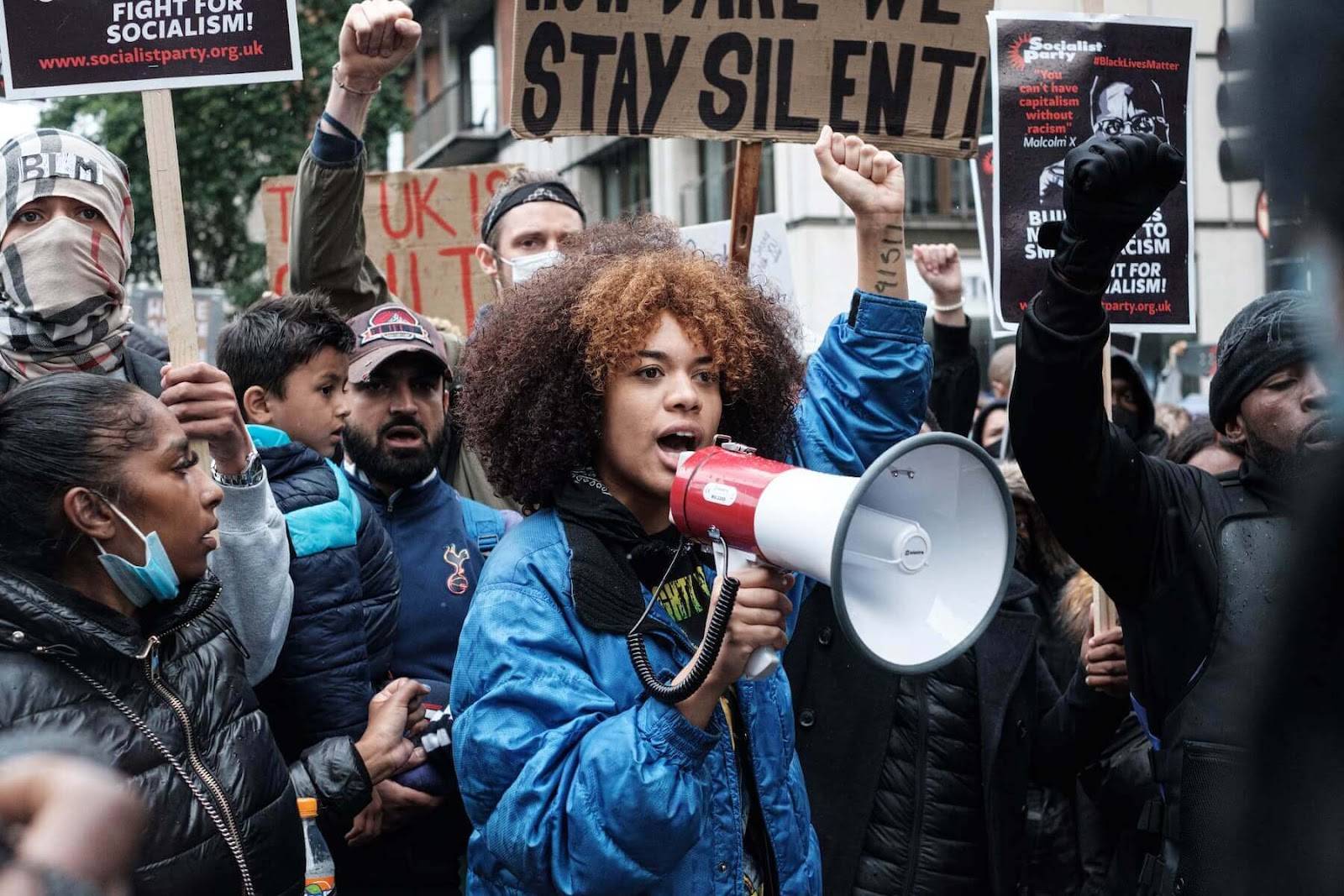 In the past few years, nothing has changed faster than technology and our relationship to it. Social media is the way most of us experience the world so it makes sense that global social movements cross over onto our social networks. But managing your business’s social media during such a time can be tricky — do you keep promoting your products and services or do you step back? If you aren’t sure how to manage social media during a time of political unrest, check out some solutions from one of Pittsburgh’s startup marketing agencies.

If you aren’t sure whether or not to engage in social media during social unrest, think about this: your customers are definitely engaging on social media. Through apps that enable real—time updates or live streaming, they are thinking, talking, and organizing around social issues. Platforms like Twitter, Instagram, and even Facebook are the most affected by social unrest.

All of this means that your audience is almost certainly encountering these topics on their feeds. And if they don’t see you reacting, they might make some incorrect assumptions about your brand and what you stand for.

The choice then becomes, how do you engage with that topic in a responsible, transparent way?

A Startup Marketing Agency Tells You Why Should You Engage

Hint: It’s about more than just managing your image — it’s about sharing your values!

Now more than ever, customers are concerned with where their money goes. Any marketing agency — startup or otherwise will tell you that buying something is no longer just a transaction, it’s an expression of ethics and values. People show their values by choosing where to spend their hard-earned dollars. They consider purchasing or more explicitly, not purchasing from somebody to be a political act. You only need to look at some of the most recent headlines to see how customers vote with their dollars.

How one Nike ad led to political backlash and record breaking sales.

Take for instance the 2018 Nike ad with former San Francisco 49’ers quarterback Colin Kaepernick at the center of their “Just Do It” campaign. The ad came out in September of 2018 and quickly received simultaneous praise and criticism. In protest of the campaign, and fueled by the subsequent response by former President Trump, some consumers who disagreed with Kaepernick’s activism sought to boycott Nike, even going so far as to burn their old Nike products.

Meanwhile, on the other end of the political spectrum, consumers flocked to Nike. Only three months later, they reported a record number of sales off of Kaepernick merchandise with a profit growth of 10% bringing income to nearly $847 million.

Nike’s move to clearly state their values gave way to record breaking sales and a more engaged consumer base but it came at the cost of some political backlash. In the end Nike stood by their ad but your own calculus for how much backlash you are comfortable with may vary.

Not all advertisements have to be political to be meaningful!

In a less politically-fraught example, during its 2018 campaign “Mom On” Yoplait looked to address a problem most moms have experienced — mom shaming. It’s “Mom On” campaign included women talking about the pressures of going back to work, staying home, breastfeeding, and even drinking while parenting. It sought to reinforce the idea that judging someone for the way they choose to parent their children can be patronizing and condescending.

In response to their campaign, not only did Yoplait successfully connect with mothers of all types but, they saw a boost in their Google search of almost 1200%. By putting their money behind a campaign that spoke to their beliefs, Yoplait was able to draw in customers who may have otherwise passed them by in favor of another, trendier brand.

Consumers Expect You To Engage Authentically

There is nothing worse than an inauthentic response to an authentic social ill.

As the social and political world becomes more and more connected to our daily life, the reality that any marketing agency, startup or otherwise, will tell you, is that customers expect you to engage with the public discourse. In a recent study published by Kantar Monitor, researchers found that over ⅔ of respondents — just shy of 68% —  said they expect brands to be transparent about their values. In a similar study taken in July of 2020, over a month after the start of nationwide protests in response to the death of George Floyd, 55% of employees expected their businesses to take a public stance.

Not All Engagement is Made Equal

Consumers expect follow through and this Pittsburgh Marketing Agency can show you how.

While it is important and now expected for businesses to engage with the political discussion, not all engagements are made the same. The only thing worse than being silent on an issue is being inauthentic and tone deaf.

Consider the example of Pepsi’s widely criticized ad featuring Kendall Jenner as a woman who defuses a tense interaction between protesters and police by handing the officer in question a Pepsi. The campaign struggled to find a receptive audience because it trivialized a very serious issue and simplified a complex problem that does not have simple solutions. Not only was the ad widely criticized and even mocked, it sparked a wide—ranging backlash that forced Pepsi to pull the advertisement after only one day on the air.

The bottom line is that if you’re going to engage, you have to do it in a way that doesn’t diminish any of the complexity of the situation because some people will find that offensive.

Make sure that your words of support are followed with actions of support.

Another change that all brands are grappling with around using social media is the demand from their consumers to follow through on their promises. In addition to words of support and solidarity, customers want actions through which brands can prove their dedication to their ethics.

In summer of 2020, following the killing of George Floyd, Nike quickly stepped into the fray with their “For Once, Don’t Do It Campaign” which sought to highlight everyone’s responsibility in helping to end police brutality. The campaign was simple, reserved, and clear. On a black background with simple, unadorned piano music playing under it, the screen reads “For Once, Don’t Do It. Don’t pretend there’s not a problem in America”.

In a stark contrast to the normally highly produced, edited, and dynamic ads they typically run, Nike chose simplicity so as not to dance around the subject matter. They chose to tackle the message head on and perhaps most importantly, they did not advertise a product at the end of the campaign. The campaign was entirely about the message and was not clouded by a desire to sell a good or service.

When asked, consumers liked this Nike ad much more than similar ads that attempted to say the same thing. In a study done by Ace Metrix, participants found the Nike ad more empowering than 98% of other media shown. While there was some minor backlash from the political right who opposed the message of the spot, the majority of the criticism came from those who agreed with the message, but wanted to see the business open their wallets and put their money behind causes that supported their ethics.

We’ve all heard the phrase that actions speak louder than words and social upheaval is an excellent time to put your money where your mouth is. After the killing of George Floyd and the protests that followed, these are just some of the ways that large companies committed themselves to the cause of racial justice.

There are other ways to be transparent about your ethics beyond donating large sums of money.

If wading into the waters of social unrest by creating a public response gives you pause there are solutions! While an organic campaign that clearly explains your business’s ethics can be incredibly successful, it requires tact, resources and authority. If you do not have the resources to create a scholarship program or donate millions of dollars to charities, there are other ways to help.

Sometimes, the best way to engage is by elevating the voices and stories of those with more knowledge and experience. Perhaps you can post about clients you work with who are trying to do good in their communities. Or you can commit to increased diversity in your own workplace and follow up as you make progress.

Another reason to look beyond the standard approach of making a fancy advertisement is that your business may not be the most experienced or authoritative source on the issue. Even if you have the desire to engage, consider your own position in the world — are you just learning about this problem when other people have been talking about it for years? If so then consider that you may not be the best messenger. If you wish to show support, try consulting experts who will definitely know more than you about the issue in question. Most importantly, remember that there are many ways to engage in the social and political discourse without making your own, highly produced advertisement. Approach it with authenticity and look at it as an opportunity to show your consumers what you care about.

There’s a lot to consider when deciding how to engage in a moment of social and political unrest — use the list below to help you.

The social and political unrest that marks our new normal can seem overwhelming but with a few simple steps from your favorite startup marketing agency, you can be on the path to communicating your values to your consumers. If you still aren’t sure how to best manage your social media during fraught times, consider reaching out and letting one of our team members assist you.

Find out how content clusters can improve your user journey, site traffic, and ultimately conversions

Uncover the Science Behind Writing Enticing Copy That Sells